Opportunity is knocking. We open doors!

Helping men and women live their best life every day.

individuals have been in a NCCH home for 10+ years.

The pathway to independent living begins with your county agency.

Because everyone deserves a place to call home!

of residents have been a NCCH resident for more than 10 years.

Hitting Home: Dignity for the Disabled

When it comes to how we should treat each other, most people agree that we all deserve dignity and respect. People with disabilities are no exception. It wasn’t so long ago that many people with disabilities were not afforded basic human dignity and were unable to participate in society. In some countries, this practice persists, but in many others, including the United States, positive changes have occurred and continue to progress.

For example, the Convention on the Rights of Persons with Disabilities (CRPD) is a United Nations treaty created to protect the rights and dignity of persons with disabilities. It promotes a shift in view from objects of medical treatment to full members of society with equal dignity and equal rights. One of the most critical of these is the right to live in the community and to participate in the community. 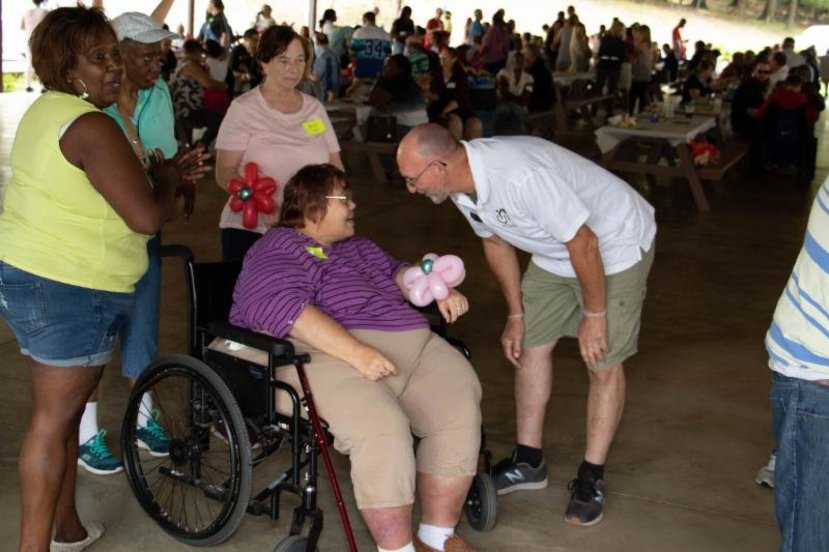 More than just houses: One of the NCCH team chats with a resident at our annual picnic.

Living and participating in a community, especially in a safe, stable, well-maintained home fosters dignity and fulfills a basic human need to belong. A stable home also increases the effectiveness of healthcare by making it more likely that medications will be stored properly, health routines established, and injuries prevented. For persons with disabilities or mental illness, living in a stable home and being treated with dignity have a direct effect on health and mental well-being.

Being treated with dignity means honoring and respecting people for their individual differences. It includes not making assumptions about an individual’s capabilities. No two people are the same, and no two people have the same abilities or disabilities. People with disabilities deserve the chance to have their individuality appreciated by others. The more they become part of the community, the more community members will be able to appreciate them for both their differences and the unique qualities that make them an important part of the whole.

While the value of being part of a vibrant community is well-known, the qualities that make housing or a neighborhood more attractive, often come at a higher cost. Many people with limited finances must make difficult tradeoffs in order to live in a home that offers the location and features they value. These tradeoffs sometimes include compromised medications, treatments, or medical appointments.

North Coast Community Homes (NCCH) provides housing to individuals with developmental disabilities, mental illness, and other disabilities that is safe, well-maintained, comfortable—and affordable. The homes blend into neighborhoods, and the residents have a greater chance of becoming part of a community than in the institutionalized past, affording them the dignity they deserve.

NCCH honors the dignity of its residents by letting them know that their needs and wants regarding their homes are valued. Such treatment sends the message that they are worthy of respect or esteem and contributes to an overall sense of self-worth. A safe, comfortable, and affordable home serves as a symbol for that worth.

Get connected...resources available in your county to get started on the eligibility process.

Insights, Updates & Impact of our mission.